Shown below, in chronological order, is the Memorial construction progress to date.

The Memorial site as it appeared in early 2013 as the project began.
The original monument was dedicated in 1959 and has been relocated to the South end of the block.
The inscription on it reads:
"TO THE GLORY OF GOD AND TO THE MEN AND WOMEN OF THIS COMMUNITY
WHO SERVED IN THE ARMED FORCES OF THE UNITED STATES IN ALL WARS" 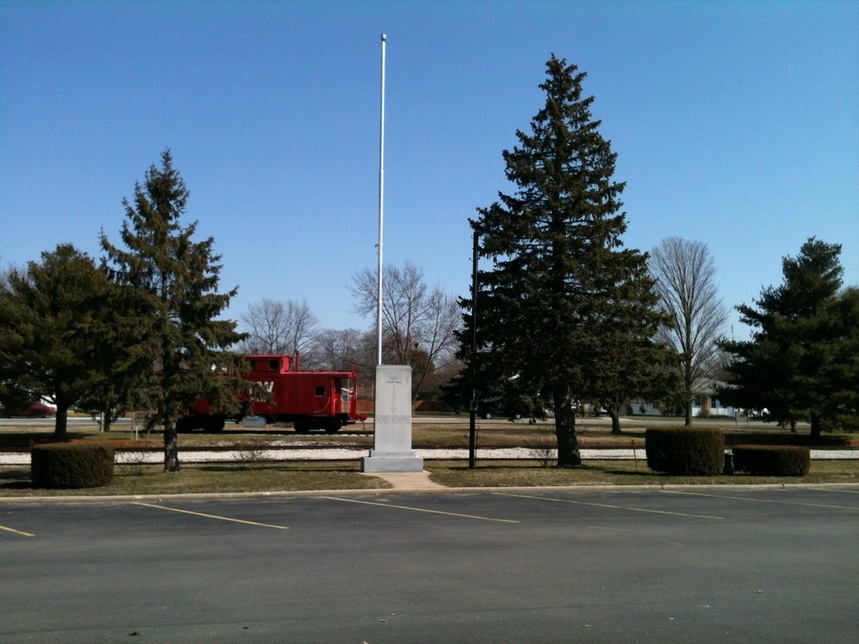 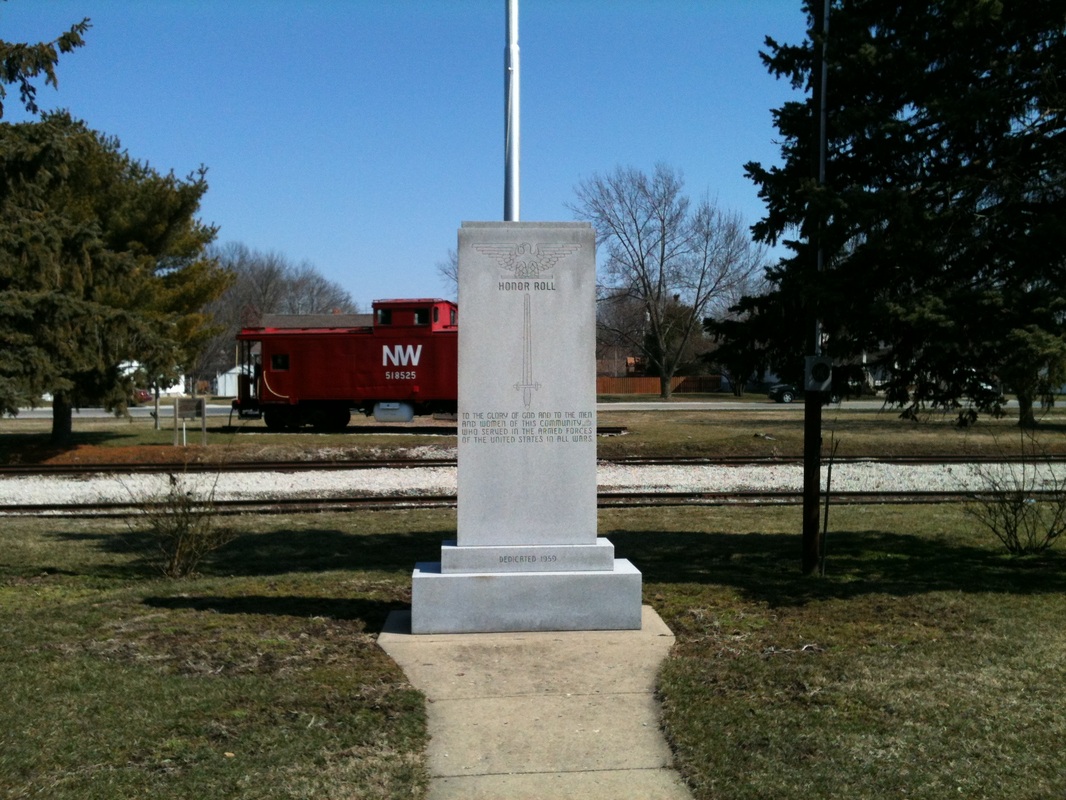 ORIGINAL MONUMENT RELOCATION
On 5/7/2013 the original Monument was relocated from the middle of the block to the South end to make way for the new Memorial.
Below are some pictures of the Spence Monument Company crew making the move.
Thanks guys for a job well done! 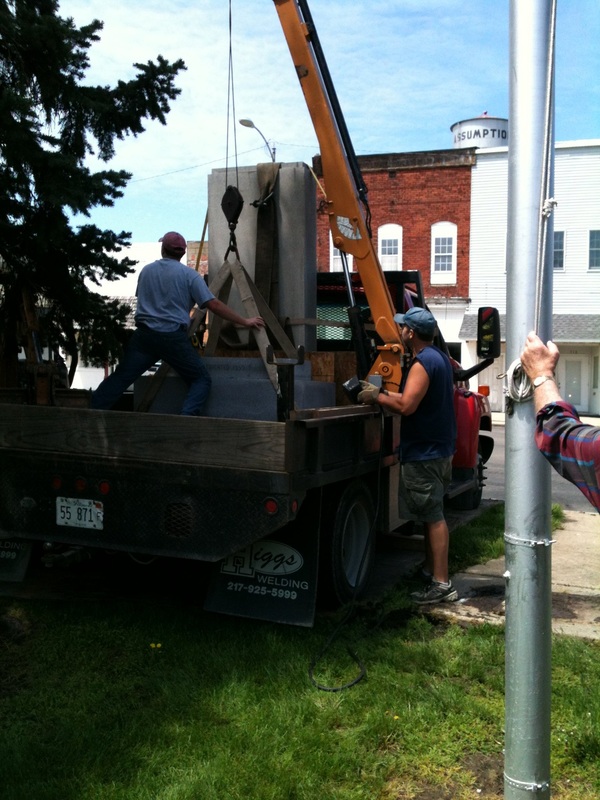 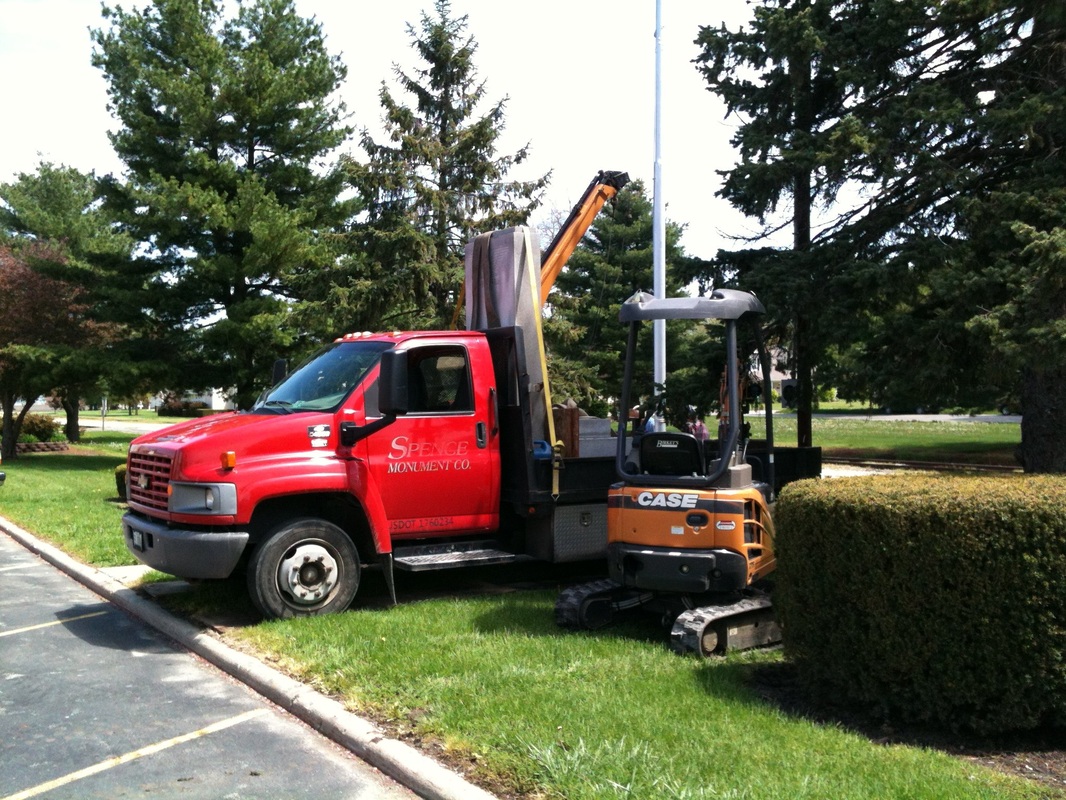 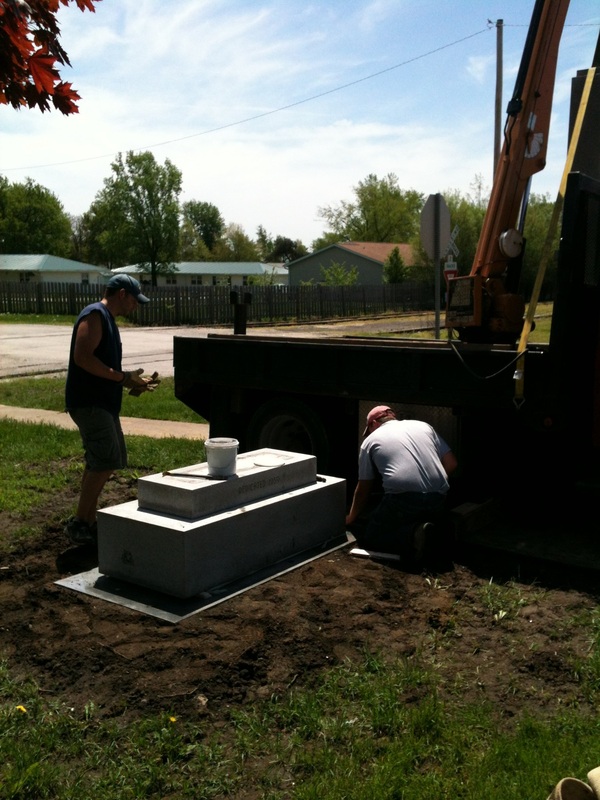 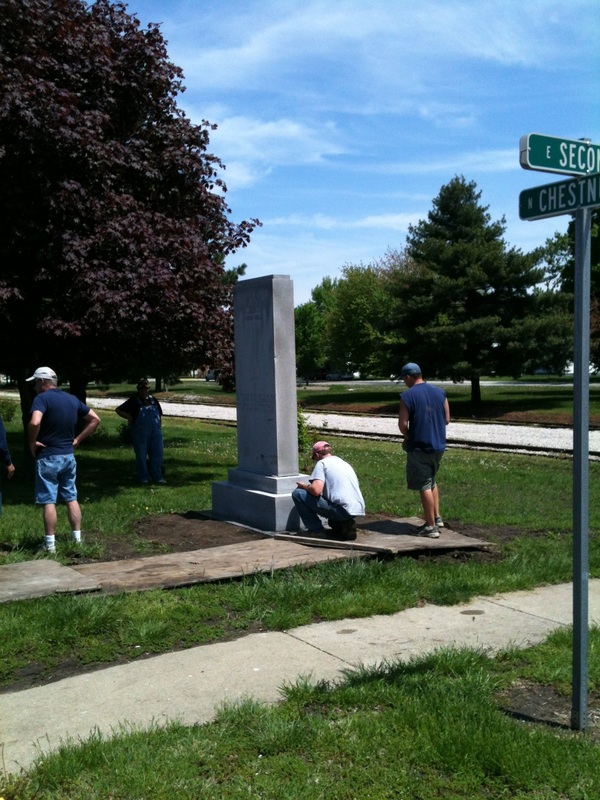 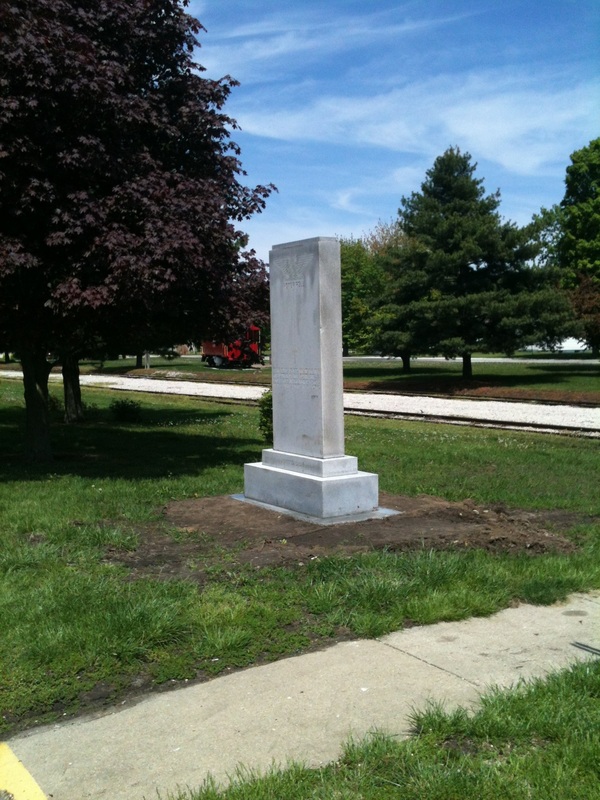 CLEARING OF THE SITE
On 5/11/2013 an industrious crew took to the task of preparing the site for the new Memorial.
Existing concrete was removed as well as the original flag and power poles. Preliminary leveling and grading of the site was also completed.
A special thank you to everybody involved for the use of your equipment and for your generous help!!
Without the generous support of these individuals and others like them, completion of a project of this magnitude would not be possible. 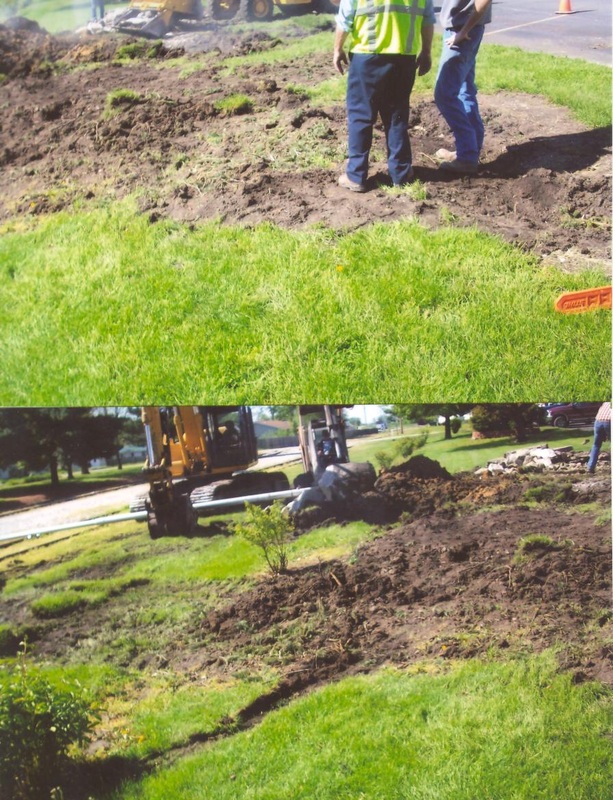 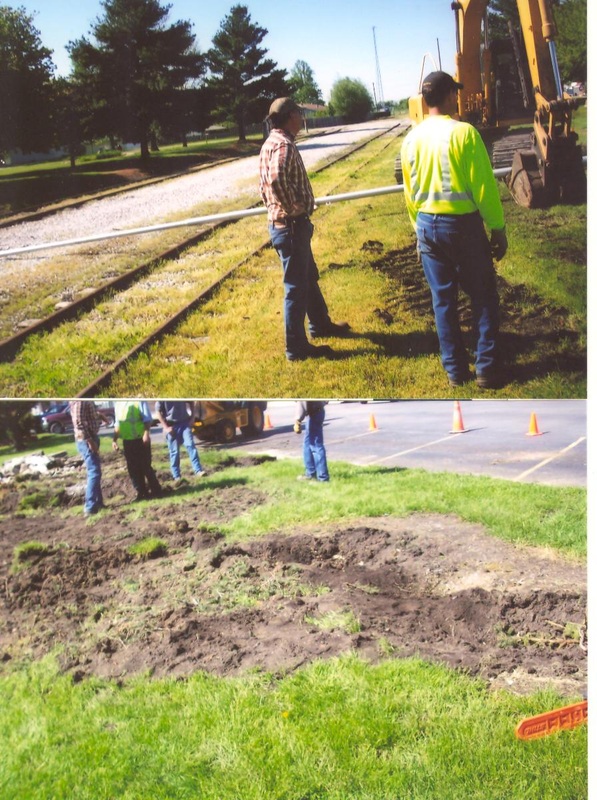 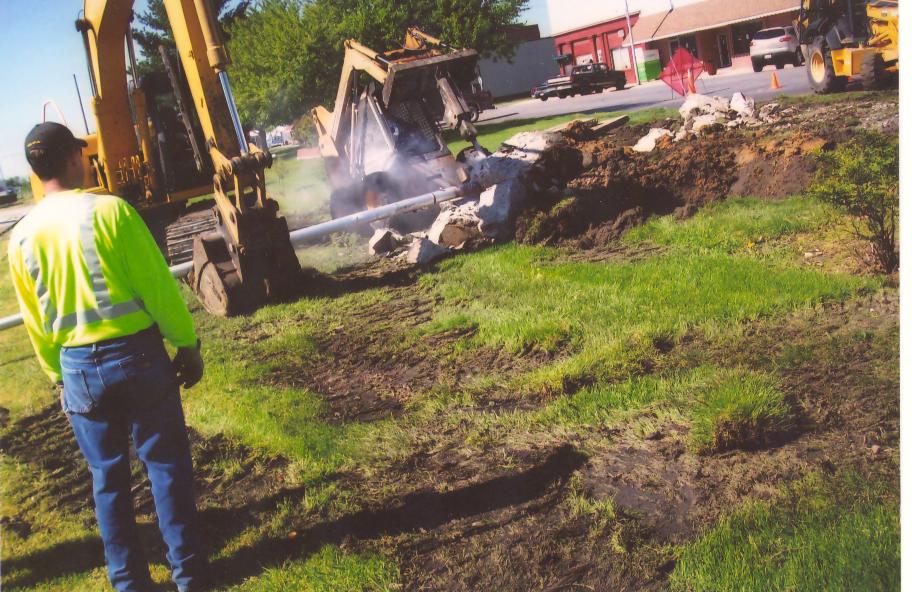 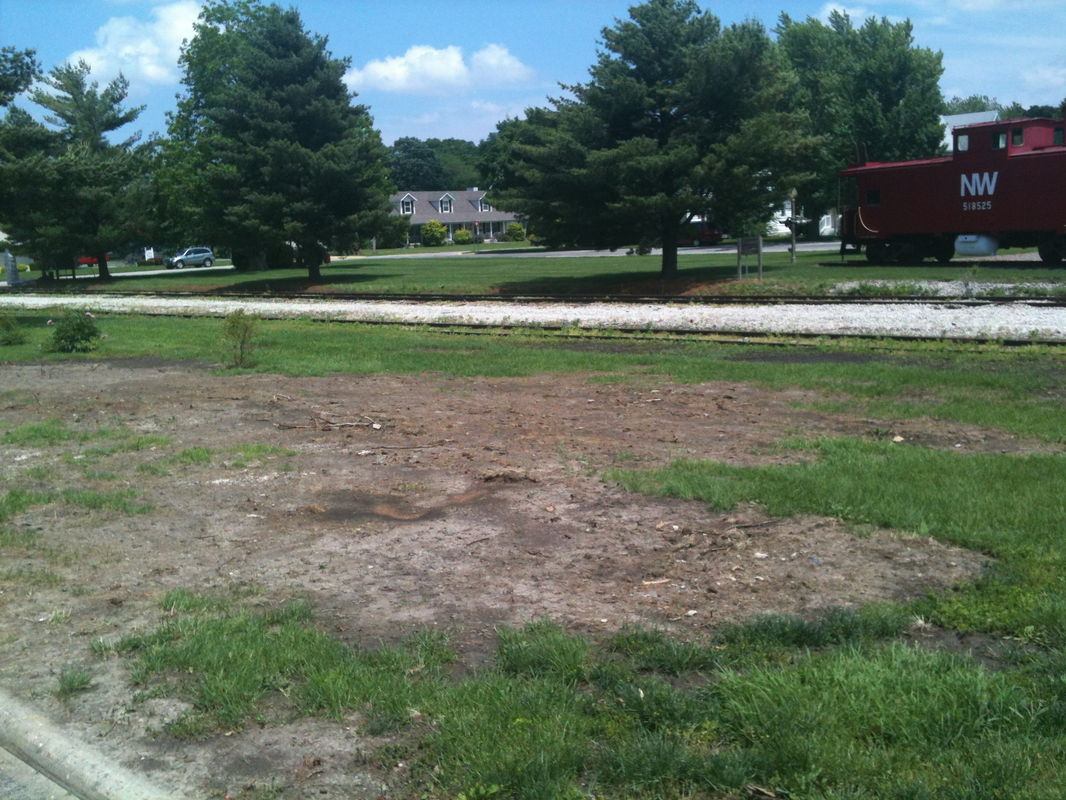 Cleared site awaiting the next phase

Added 9/10/2013
The Assumption Veterans Memorial committee would like to update you on our progress to date.  As you have probably observed, the ﬁrst steps in construction have been taken.  Early in the summer, the 1959 memorial was moved to the south end of the100 block of North Chestnut St. after which John Holthaus cleared the existing site and removed the concrete base that supported the original memorial.  Last week, Castle Concrete of Pana poured the retaining wall that was necessitated because of the slope of the construction site from the street.  It is 66 feet long.  Notice that there is a red line on the face of the wall.  That line represents the height of the concrete ﬂoor that will be poured around the monument.  It is three inches above the street curb to allow for drainage.  A cap will be placed on top of the wall.  With the cap, the wall will be about chair height above the monument ﬂoor.  A new concrete approach to the old monument to the South has also been poured. Thanks Castle crew!

The center monument will be erected this fall.  Bob Dondeville is working on casting the eagle in bronze, but it won’t be ready to be attached until spring.  The ﬂanking stones that will list the names of the veterans will also be erected in the spring. This will allow the committee more time to collect names and give Spence Monument time over the winter to engrave the names on the stones.

The Assumption Community has been great in their support of their veterans and the monument,  As of August 31,  there is a balance of $51,199,48 in the Memorial Fund.  We have paid Spence Monument $50,000 of the approximately $59,000 that we owe them.  A 35-foot ﬂag pole has been purchased for $1990.  The concrete work and the landscaping are future bills.  Thanks again to all of you for your generous support.  Please help us with names.  Any veteran who has ever lived in Assumption is eligible even if they are listed on another monument in another town.  We want them on our monument, too. Please click HERE to contact us to share any information you might have on an area Veteran.

. Below are some pictures showing the progress on the wall to date. Thanks to Norman Bethard for the pictures.

During the week of September 24th, additional site preparation was begun. An industrious crew laid drainage tile, moved and leveled dirt, and spread roadpack to get the site ready for the setting of the center Memorial stone later this Fall. Below are some pictures showing the ongoing progress.
Flagpole Erected and Monument Foundations Poured
Over the past few weeks, much progress has been made at the Memorial site. On a recent sunny October Sunday, the new 35' aluminum flagpole was erected with the help of Greg Butcher and his bucket truck, as well as a hardy crew. Old Glory will be flying high again on Main Street in time for the Veterans Day ceremonies on November 11th. During the week of October 15th, the Spence Monument crew returned to dig, form, and pour the large foundation for the center Memorial stones. They again returned the week of October 29th to do the same for the (6) foundations for the side stones.
Pictures showing the work completed follow below.

This week we want to bring you up-to-date concerning the Assumption Veterans Memorial. As of October 31, 2013, we have collected gross receipts of $110,187.62 and have had expenses of $68,096.80 leaving a balance of $42,090.82. We owe Spence Monument $8,300, and Castle Concrete has bid the remaining concrete work for $7,475. We still have unknown expenses for lighting, landscaping, and the remaining cost for the eagle.

Bob Dondeville is casting the eagle just for the cost of materials and his mileage to and from Eastern Illinois University where he is casting it.  He has finished the clay model of the eagle, and it is fabulous. I want to share the email Bob sent to us when he told us that he wanted to cast the eagle in bronze:
“This has been driving me crazy about the Assumption Veterans Memorial. I want this Memorial to be one of the most outstanding veteran memorials in the state of Illinois. What I think will do this is what keeps sticking in my head.  It will be more work for me, but I don't care. I still have this idea in my head that instead of having the eagle etched into the granite, I will create and cast a bronze eagle. I contacted the professor whom I took classes with while attending Eastern Illinois University. He told me I could have complete access to the foundry for casting the eagle and use of materials.
I have been tossing this around in my head since the first day I sat down and talked to you guys.  I personally think it's the right direction to go. The etching idea is OK, but the bronze eagle would be WOW!  I think we owe that WOW to all our Veterans.”

The monument is more than a job to Bob. It is his passion. Below are 2 pictures showing his inspiring creation.

The Veterans Memorial Committee invites everyone to the dedication of the Assumption Veterans Memorial on Sunday afternoon, May 25, 2014, at the Memorial site on Chestnut Street beginning at 2PM. It will follow the annual VFW Auxiliary dinner which is from 11 AM to 1 PM at St. Mary's Parish Hall.  The dedication is an important event that we hope you will attend. The Assumption Alumni Banquet will be Saturday evening, so plan to attend all three events. Come show your appreciation for our veterans.

The week of March 31st, Spence Monument of Charleston, Illinois, placed the granite slabs on the foundation which will serve as the base for the center monument.  Spence is also starting to etch the veteran's names onto the stones.  Any names given to us now will be added at a later date. Bob Dondeville, art teacher at Mt. Zion High School and designer of our monument,has finished the wax model of the eagle.  The eagle is being cast in bronze at the Fine Arts Sculpture Centre, Clarkston, Michigan. It will be affixed as the centerpiece of the center monument.  As more details about the dedication develop, we will keep you informed  Photos of the Spence crew placing the granite slabs are shown below.

Lighting Support Posts, Retaining Wall Cap, and Main Pad Completed
In the middle of April, Greg Butcher began to install the electrical service that will supply the Memorial lighting as well as provide power for events held on Main Street in the future. Beginning the last week of April, Castle Concrete finalized the finish grading for the site. This was followed by the addition of the lighting support posts, the capping of the rear retaining wall and the pouring of the main pad. The concrete must cure for 7 days before the continuation of any further work.This is all in preparation for the impending arrival and setting of the main stones from Spence Monument. Pictures of those tasks being completed are shown below. Thanks Greg and Castle crew!
Additional Veterans biographies have also been added as of 5/21/14. PLEASE CLICK HERE TO VIEW THOSE This page last updated 5/21/14

The second and third week of May saw much work accomplished. All the names were engraved on the flanking stones at the Spence Monument facility. Those stones were then erected the weekend before the Dedication. Tuesday of that week, the center monument was brought to the site and painstakingly assembled by the Spence crew. Final cleanup duties will follow awaiting the Dedication Ceremony on May 25th. Pictures of those tasks being completed are shown below. 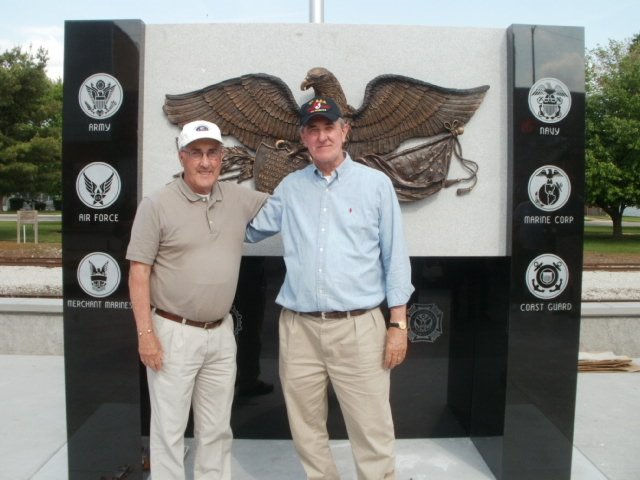